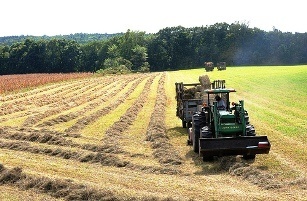 The haying machinery industry, which had received a major blow during the 2007-2009 recession period, is now looking up with several technological advances that has driven it to positive directions

According to a report by Global Industry Analysts, the 2007-2009 recession had most significantly hit the dairy industry, a key end-use sector for haying machinery. The decline in demand for dairy products forced farmers to reduce investments in livestock farming equipment, such as haying machinery.

While demand in developed countries like the and declined sharply, demand in Asia-Pacific remained stable backed by the impetus provided by governments in the form of subsidies.

In the year 2011, farming activity recovered in sync with the rise in global commodity prices. Increased commodity prices led to higher farm incomes, encouraging farmers to invest in farm equipment including haying machinery.

The long-term outlook for the global haying machinery market is positively guided by population growth, rising emphasis on food security and self-sufficiency especially in developing countries, increasing household protein consumption, and mechanisation of farming practices. Technology developments such as engineering refinements in haying machinery are also expected to drive growth in the market.

Credit availability, scarcity of farm labour, and subsidies offered by the government to encourage farm mechanisation represent other factors dictating demand patterns in the market.

Rising farm consolidation in developed countries is expected to benefit demand for larger and high capacity haying machinery. Urbanisation is a key factor responsible for consolidation of farms into larger farming plots.

Another key trend is the growing utilisation of telematics for haying activities. Telematics is increasingly being used to provide information such as vehicle location, motoring speed and engine status (running/idle), and other useful factors such as driver logs, threshold notices, fuel tax reports, routing and two-way messaging.

To continue reading the rest of this article, please see the April/May 2013 issue of Far Eastern Agriculture