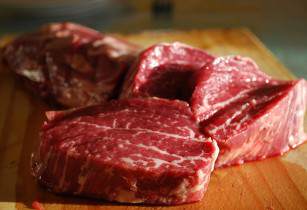 Marbling refers to white flecks of fat within the leaner sections of meat, which resembles a pattern of marbles. The more marbling in meat, the better the cut.

Chief researcher Yoshito Nakashima said, “This is the first time such machine has been created in the world. It only takes about 10 seconds for the marbled-beef scanner to determine the level of fat inside the cattle.”

The device uses a single-sided nuclear magnetic resonance scanner, which can detect the amount of muscle and fat non-invasively. According to the researcher, the marbled-beef scanner can only check an area about three centimetres deep from the skin, but observing the cattle’s trapezius muscle is usually enough to provide information on the level of marbling it has.

The new machine will provide the level of fat in quantitative figures, added Nakashima. Researchers at the Japanese institute intend to further develop the machine for use on other meat types such as Bluefin tuna. The marbled-beef scanner might also be applied to observe the health of the cattle and other livestock, they added.