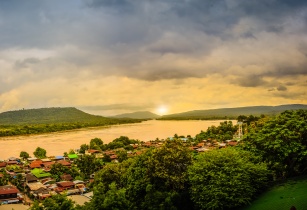 The Asian Institute of Technology (AIT), in association with the University of Exeter (UNEXE), the UK, held a technical workshop of a research project on “ENRICH: Enhancing resIlience to future hydro-meteorological extremes in the Mun river basin in the northeast of Thailand”

The workshop held on he project has assessed plausible future land-use change and climate change scenarios in the Mun River basin and their combined impacts on future hydro-meteorological extremes. According to the research, future dry and wet extremes are going to be more severe and frequent and the research team has proposed several adaptations strategies for the basin to cope with hydro-meteorological extremes in the coming decades.

AIT said that the Mun river basin which covers many provinces in the northeast of Thailand was chosen as the research area as it is prone to both droughts and floods. About 80% - 90% of rice cultivation in the basin relies on rainfall as irrigation facilities are limited which makes agriculture highly vulnerable to climate change and can seriously affect rice production, living conditions, and income of farmers who represent the majority of the population in the basin.

The key end-users of the project results are set to be the local stakeholders, especially farmers, in the Mun River basin and beyond.

According to the research, while the projections show that extreme rainfall events will increase, the annual number of rainy days could decrease by up to 15 days in the region. With results showing that under combined stressors of climate change and land-use change, the duration of agriculture droughts of 10-year return period will increase by 50% and the severity will increase by more than 150%. The agriculture sector is said to be directly affected, triggering domino effects such as food security, economic hardship and social stability. To prevent or lessen such impact, the researchers also proposed adaptation strategies which include creating water storage, shifting planting date earlier when the rain starts earlier and using a combination of water and fertilizer/nutrient management to increase both the quality and stability of crop production.

AIT professor Mukand S. Babel said, “Comments from stakeholders participating in the workshop, including one which proposed the involvement of the private sector to provide agrotechnology to the farmers as the adaptation strategy, will direct the future research on the topic.”